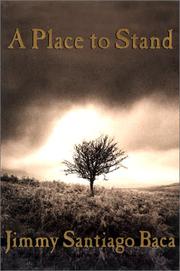 A PLACE TO STAND

The Making of a Poet

A mercifully brief memoir of the Pushcart Prize– and American Book Award–winning Hispanic poet’s criminal past, and his agonizingly slow discovery of the redemptive power of writing while serving a prison term.

Born in New Mexico as the third child of an alcoholic father and philandering mother, Baca (Black Mesa Poems, not reviewed) was handed off at seven to his grandparents when his father disappeared and his mother ran off with another man—only to find himself in an orphanage when his grandfather died shortly thereafter. Early efforts at schooling failed, and the marginally literate Baca ran away and experimented with criminal behavior. Without any strong role models, fruitful employment, or defenses against anti-Hispanic bigotry, Baca, unusually strong for his youth, developed a vicious proficiency at streetfighting and deliberately resisted attempts by occasional benefactors to set him straight. When he discovered that his first lover was unfaithful to him, Baca drifted to California, where he was fired from his job as an unlicensed plumber after he refused the sexual advances of a housewife. In Arizona, a life as a drug dealer soon landed him a five-year sentence in Florence State Prison—an overcrowded, maximum-security facility where Baca turned to books as an escape and began writing angry, bitterly ironic poetry to purge himself of emotional turmoil. “I am Healing Earthquakes,” he writes in one of his early poems, “a man awakening to the day with a place to stand / And ground to defend.” After he was released, his attempts at reaching a reconciliation with surviving family members ended in horror when a brother died from alcoholism and his stepfather murdered his mother and then killed himself. Baca finally married, clinging to the love of his wife and his poetry “to give voice to the voiceless and hope to the hopeless, of which I am one.”

A brutally unflinching look back at a dead-end youth that became a crucible for vivid and vital art.