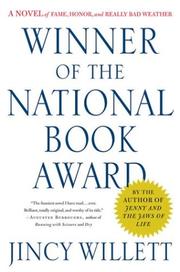 WINNER OF THE NATIONAL BOOK AWARD

A Novel of Fame, Honor, and Really Bad Weather

Hidden behind that dumb title is a mildly creepy tale of misbegotten love and ultimate revenge, a second outing from Willett (Jenny and the Jaws of Life, 1987).

The action is set in Rhode Island in the 1970s. Abigail and Dorcas Mather are twins, born in 1938, and polar opposites, as we are reminded repeatedly. Dorcas is mind, Abigail is body. Dorcas, the narrator, who will become a head librarian, decides at age 12 that she will reserve her sensuality for books: “I yearned for duty the way Abigail yearned to show her ass.” And show it she does, one carousing night, to the football team, who promptly gang-rape her. Abigail is simply happy to be the center of attention. She’ll go on to a brief first marriage and motherhood (the twins raise daughter Anna together) before becoming a “mailman” and poisoning half the marriages in town. On her rounds, she meets Guy De Vilbiss, world-famous poet, and his sycophantic wife Hilda; the pear-shaped Guy and sheeplike Hilda come across as unprepossessing freaks. Through this couple, the twins meet Conrad Lowe, who will be their nemesis. Most famous for the exposé of his mother, an evil Hollywood diva, Conrad is a manipulative sadist, “ a ladies’ man who hated ladies.” While Dorcas reads him correctly, Abigail, though no masochist, falls in love with him, and Conrad relishes her as the perfect victim. On their honeymoon, Conrad chains the seriously overweight Abby to the bed and starves her. The marriage goes downhill from there, and Conrad even manages to humiliate the virtuous Dorcas sexually before Abby recovers her pride and runs Conrad over, eight times.