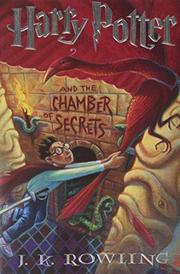 HARRY POTTER AND THE CHAMBER OF SECRETS

From the Harry Potter series, volume 2

This sequel to Harry Potter and the Sorcerer's Stone (1998) brings back the doughty young wizard-in-training to face suspicious adults, hostile classmates, fretful ghosts, rambunctious spells, giant spiders, and even an avatar of Lord Voldemort, the evil sorcerer who killed his parents, while saving the Hogwarts School of Witchcraft and Wizardry from a deadly, mysterious menace.

Ignoring a most peculiar warning, Harry kicks off his second year at Hogwarts after a dreadful summer with his hateful guardians, the Dursleys, and is instantly cast into a whirlwind of magical pranks and misadventures, culminating in a visit to the hidden cavern where his friend Ron's little sister Ginny lies, barely alive, in a trap set by his worst enemy. Surrounded by a grand mix of wise and inept faculty, sneering or loyal peers—plus an array of supernatural creatures including Nearly Headless Nick and a huge, serpentine basilisk—Harry steadily rises to every challenge, and though he plays but one match of the gloriously chaotic field game Quidditch, he does get in plenty of magic and a bit of swordplay on his way to becoming a hero again.