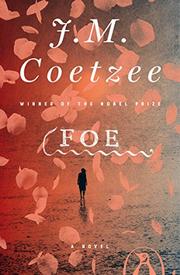 Sometimes maddeningly, sometimes brilliantly elusive, Coetzee's new novel gives the Robinson Crusoe story a deconstructionist turn, adding new characters and including the vexed reactions and wisdoms of the original's author himself, Defoe (the foe—upon whom a story breaks not always willingly). Susan Barton is a young widow shipwrecked and thrown to safety on the very island where Crusoe and his man Friday eke out their existence. Crusoe by now is a sort of solitary burgher, unwilling to leave; and Friday. . .no one really knows about Friday, since his tongue has been cut out and he cannot tell anyone anything. Since South African Coetzee has used allegorical political material before, it's allowable to see Friday's cut-out tongue as social emblem for black South Africans; but then, when Susan, Crusoe, and Friday actually are rescued from the island (Crusoe dies mid-journey but Barton and Friday return to England), this impression lessens. What increases is the unstable relation between muse and creator—Susan who was there and Defoe who wasn't, yet who must imaginatively re-create what Susan may also not have known as well as what she did. Sadly, Coetzee muddies this elegantly simple template for art vs. experience by a late professorial brief (delivered by Foe) for writing-qua-itself—a bit of Gallic fashionableness that has the effect of all but shattering the fragile dramatic spell drawn up till then. Often piquant—but also some very, very thin reeds on which to build.