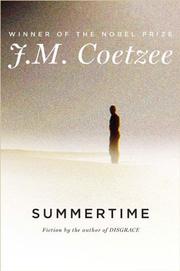 Navel-gazing reached new heights in the recent work of this South African–born, now Australian-resident writer. The good news is that his latest novel, closely related to the earlier autobiographies Boyhood (1997) and Youth (2002), is much more engaging than its recent predecessors dominated by the presence and influence of Coetzee’s (really) annoying surrogate Elizabeth Costello. She isn’t consulted during the parade of interviews conducted here by would-be biographer Mr. Vincent with five people who knew the late (!) eminent and notoriously reclusive writer “John Coetzee.” The period investigated is the 1970s, when fictional Coetzee, retreating from an embryonic and unfulfilling academic/literary career abroad, returned to live in Cape Town with his widowed father. We learn that John’s affair with a vigorous married woman couldn’t survive her growing conviction that he “did not love anybody, was not built for love,” that “sex with him lacked all thrill.” The cousin he had loved when both were children later found him unsociable and emotionless. Brazilian dance teacher Adriana and former colleague Sophie failed similarly to achieve intimacy with John, and another colleague, Martin J, pronounces the fictional Coetzee’s withdrawal symptomatic of his fear of human connection. Numerous distancing devices (e.g., Mr. Vincent’s reshaping of Margot’s disjointed responses into a coherent narrative) call into question everything “revealed” to the interviewer, while calmly keeping the reader at arm’s—and mind’s—length. The result is a fascinating hybrid, weakened only by Mr. Vincent’s pace-killing interruptions, that becomes simultaneously enlightening and amusingly evasive.

The real Coetzee’s austere integrity and terse candor make this the best yet of his ongoing self-interrogations.