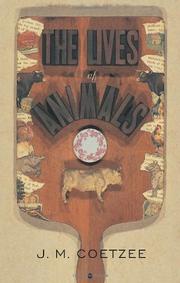 THE LIVES OF ANIMALS

Fluent, challenging lectures on the ethics that shape the human-animal relationship, from South African novelist and essayist Coetzee (The Master of Petersburg, 1994, etc.). Princeton’s Tanner Lectures are usually philosophical essays exploring human values. Here Coetzee subverts that formula by shaping his talks into fictional lectures given by an elderly novelist, Elizabeth Costello, on “an enterprise of degradation, cruelty, and killing which rivals anything that the Third Reich was capable of”: our treatment of animals. It is now an old and troubling notion, this analogy between the death camps and the meat business, but it is compelling for Costello: she is troubled by our willed ignorance of the past and present existence of slaughterhouses, the sickness of soul that denies any creature the sensation of being alive, our poverty of sympathetic imagination. “The horror is that the killers refused to think themselves into the place of their victims . . . They do not say ‘How would it be if I were burning?’ . . . In other words, they closed their hearts.” Coetzee is obviously aware of the potential noxiousness of this terrain (the poet Abraham Stern scorns Costello’s use of the analogy: “You misunderstand the nature of likenesses; I would even say you misunderstand willfully, to the point of blasphemy”), and he uses it with provocative intent. Self-evident, though, is our collective failure of nerve (Thomas Aquinas through Descartes and Kant to today) to unleash “the extent to which we can think ourselves into the being of another.” Perhaps, Coetzee implies, rational thought, lagging behind sympathy, will follow its lead if powerful fictions and images can trigger our fellow feelings. Coetzee takes no prisoners; there is always suffering on the road to salvation. That includes Costello’s painful relationship with her son, a terrain so emotionally arid it makes the skin crawl. Included are four commentaries—by literary theorist Marjorie Garber, philosopher Peter Singer, religious scholar Wendy Doniger, and primatologist Barbara Smuts—that add touchwood, and a measure of windiness, to Coetzee’s ethical tinderbox.