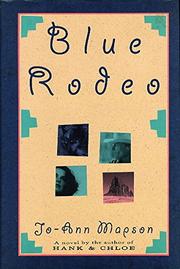 Mapson's second novel set in the contemporary West is as lyrical and romantic as her first (Hank & Chloe, 1993), but its stock California-yuppie characters fail to inspire much interest and the predictability of the love story disappoints. Margaret Yearwood is in her 40s, and recently her world has fallen apart. Her husband, an LA television writer with a penchant for ambitious actresses, has divorced her to marry his pregnant young lover. Her teenaged son, Peter, acting out over the divorce, skipped school to go swimming in Tijuana, caught meningitis, and has become completely deaf. Traumatized by her son's suffering, Margaret has turned for comfort to a solicitous male friend, only to have her prettier younger sister slip into bed with him first. Understandably fed up with California, Margaret has fled to New Mexico, partly to be near her still-angry son, who has demanded to attend a school for the deaf outside of Santa Fe and wants to make his home with a deaf foster family, and partly to recover from the chaos of her own life. Renting an isolated farmhouse just outside the town of Blue Dog, she encounters Owen Garret, a middle-aged cowboy living on the grounds. Owen has his own past to escape- -alcoholism and an accidental murder committed in his younger years. As Margaret and Owen try to face their demons through isolation (in his case) and painting pictures (in hers), a very foreseeable romance develops against a background of wildflowers, cozy fires, and meaningful conversations over cups of tea. Hank & Chloe startled the reader with its original, eccentric characters. This follow-up is likely to lull them to sleep with its easygoing, unsurprising, country-western charm. (Literary Guild selection; author tour)