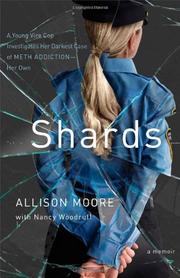 An honest, introspective account of a vice cop’s methamphetamine addiction.

Written with the assistance of writing instructor and novelist Woodruff (My Wife's Affair, 2010, etc.), Moore’s harrowing account begins at the lowest point of the author’s life. Plunged into the depths of her addiction, the despair and fear are palpable as she chronicles her frantic attempt to commit suicide. “I’m living in hell and I can’t even die,” she writes. Moore then spins the narrative back in time to fill in her story before her addiction and near death. Before her first snort, the author was an innocent blonde island transplant, having moved from New Mexico to Hawaii. A waitress looking to finally put down roots, she applied to the Maui Police Department on a whim and was shocked when she was accepted. Once she became part of the department, Moore’s hard work and dedication set her apart, and she began working on drug cases on her own in a feverishly idealistic dream to rid the islands of the scourge of meth. Then a series of emotional drains left her feeling like she couldn’t cope, and the circumstances of her job left her with a small amount of meth in her hands. The spiral that comes next may be predictable, but it feels fresh in Moore’s telling, and the outcome is no less terrifying. “The meth gave me a false sense of reality,” she writes, “masking the truth and keeping me alive until it almost killed me.” Somehow, knowing that the author survived to tell her story doesn’t offer any comfort or allay fear for her well-being. This effect can only be attributed to the strong writing, with Woodruff helping to bring the story to life.

An addition to the world of addiction literature worth reading, full of grim reality that thankfully never crosses the line into gratuitous territory.

SOMEONE ELSE’S CHILD
by Nancy Woodruff

MEMOIRS OF AN ADDICTED BRAIN
by Marc Lewis
Nonfiction