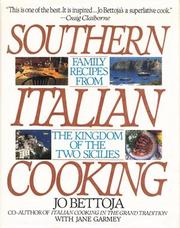 Family Recipes from the Kingdom of the Two Sicilies

An American who now lives and teaches Italian cooking in Italy, Bettoja is also co-author of Italian Cooking in the Grand Tradition (1982—not reviewed). Like the earlier book, this is arranged in menu form, with a few extra recipes at the end and enriching notes throughout on the origins and context of the foods and dishes. Here, however, the menus represent actual meals that Bettoja enjoyed in variously grand or aristocratic private homes (she doesn't say where she got the appended pasta puttanesca, though); and the recipes—from the Sicilian signature pasta with fresh sardines to that island's inspired sweet-ricotta desserts— are family treasures she wheedled out of her hosts or their prized resident cooks. The recipes themselves are not especially imposing, though there are several special-occasion dishes you wouldn't want to tackle on an average Wednesday. The whole enterprise smacks a bit of the ``kitchens of the rich and famous'' approach (though, in fact, these cooks never allowed Bettoja into their kitchens), but then we've had a lot of the simple pleasures of the poor, so here's one for the Lampedusa following.