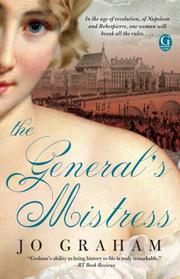 Liberty and libertinage, reason and magic—the conflicting passions of the French Revolution swirl throughout the adventures of Elzelina van Aylde-Versfelt.

Based upon the real life of Maria Versfelt (alias Ida St. Elme)—courtesan, actress and writer—Graham’s (Stealing Fire, 2010, etc.) latest entwines history, romance and a delicious dollop of fantasy. Hearing voices and seeing ghosts in mirrors, the women of Elza’s family have always stood a bit outside society’s bounds. The mirrors and the death of her only son, Charles, have maddened Elza’s mother. Elza comforts her mother by cross-dressing as Charles, which soon becomes a habit—for it is, indeed, easier and safer to travel as a man. Soon, Charles becomes an alter ego. In addition to teasing gender lines, Elza has herself seen the image of her true love in the tarot card image of the King of Chalices. By 12, she has been coerced into marriage to handsome Jan Ringeling. Seven years and two children later, she finds herself chained to a cold man with political aspirations but little talent. Elza makes a daring escape, cross-dressing and fleeing her enraged husband (who threatens to have her confined as mad, just like her mother). She seeks protection from a commander in the French army, the brilliant military strategist Victor Moreau. Yet his protection comes at an interesting price: Elza must become his mistress. So begins an erotic metamorphosis from Elza, the dutiful wife, to Ida, the seductive courtesan. On Moreau’s arm, Ida enters Parisian society, gaining admiration from men and women alike. Yet, the tarot card reading lingers with her. While she respects Victor, she longs to find the King of Chalices. On her journey towards her red-haired beloved, Ida/Elza becomes an actress, a medium channeling an angel and even Bonaparte’s paramour.