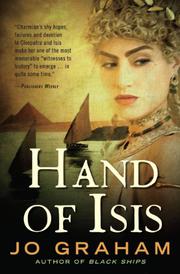 Seeress Gull (Black Ships, 2008) is reincarnated hundreds of years after the fall of Troy as Charmian, handmaiden and half-sister to doomed Queen Cleopatra of Egypt.

The daughter of a dead pleasure slave and Pharaoh Ptolemy Auletes, Charmian is dedicated to Cleopatra when both girls are six. Although Charmian and her fellow handmaiden and half sister Iras are both slaves, they are also Cleopatra’s chief confidantes and ministers once she becomes queen. But good government, Charmian’s prophetic visions, clever diplomacy and Cleopatra’s more intimate alliances with Julius Caesar and Marcus Antonius ultimately avail them little against the crushing power that is Rome. Snatching love and happiness where they can, the three sisters devote themselves to the goddess Isis, and in her service, to preserving what they can of their way of life. With a solid grounding in history, this novel is a far richer work than its predecessor. Although most readers will already be aware of Cleopatra’s sad fate (and will know from page one that Charmian shares it with her mistress), the journey, and the vivid descriptions of life in the cosmopolitan city of Alexandria, make this book well worth reading. Moreover, the sympathetic portrayal of Cleopatra as an intelligent and devoted ruler willing to use whatever tools at hand to gain advantages for her people is a welcome and intriguing departure from prior fictional depictions of the Egyptian queen as a decadent nymphomaniac, love-blinded fool or drugged-out opportunist.

Recommended for those with an interest in the ancient world.