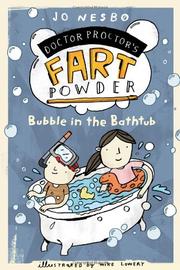 BUBBLE IN THE BATHTUB

Spun from the quirky cast and gaseous premise introduced in Doctor Proctor’s Fart Powder (2010), this even sillier sequel expelled by the popular Norwegian crime novelist sends young Lisa and Nilly from Oslo to Paris and from the Middle Ages to Napoleon’s tent on the eve of Waterloo. Their aim? To rescue their eccentric inventor friend Victor Proctor and the love of his youth, Juliette Margarine. Despite pursuit by Juliette’s crimelord husband Claude Cliché and his gang of lookalike thugs, the young folk help to reunite the lovers. They also, with help from the puissant blasting powder of the title and a bathtub time machine, save the Doctor from the guillotine, call off the battle of Waterloo, dance on the stage of the Moulin Rouge, inspire Gustave Eiffel to build a tower, trick Columbus into thinking he’s landed in India and other historical feats. Though Lowery’s illustrations are too rare and sketchy to have much influence and a significant character seems to have been trucked in just to be killed off later, the tale burbles comically along and everything comes out right…in the…end. (Light fantasy. 10-12)