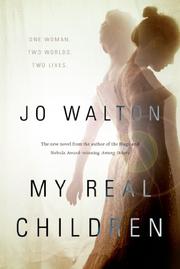 It’s 2015, and Patricia Cowan is “very confused,” or so they write on her charts in the nursing home. It’s true that she has had dementia for years, but sometimes her room seems to have navy blue curtains and sometimes pale green blinds. More puzzling, she is sure she remembers two distinct sets of children. Both visit her, but they don't share a reality; they're from the two different lives she entered when she made the choice to marry, or not marry, Mark, when she was a young woman. The novel travels back to Patricia’s childhood, a fixed narrative, and then begins alternating chapters to follow the split. In one life, she marries Mark and becomes Tricia, an obedient wife and mother of four children. In the other, where she is Pat, love and children come later, after she’s established an ardor for Italy and a satisfying teaching career. In both, Patricia is an inspiringly open-minded, grounded, active woman, and it's a pleasure to watch her adapt to her circumstances as the novel swings her through time. Her rights and role as a woman shift depending on the choice she made, but that choice is accompanied by larger changes in the world around her as well. Unsettlingly, neither landscape is quite recognizable. Midcentury touch points develop in unfamiliar ways—concerns regarding nuclear power and its misuse loom large for Pat, whereas the International Space Station on the moon becomes a marvel to Tricia. Both lives have their share of affecting triumphs and tragedies, with the themes of family and partnership woven evenly throughout. Walton is a straightforward, unsparing writer, and she strikes a poignant balance between the ideas of agency and fate.