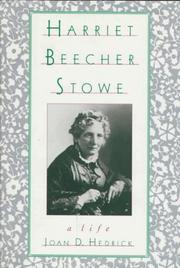 In this definitive biography, Hedrick (History/Trinity; Solitary Comrade, 1982) applies a feminine perspective to the fascinating life and tumultuous times of Harriet Beecher Stowe (1811-96), author of what's arguably the most influential novel in history and someone who only 50 years ago was described as "A Crusader in Crinoline'' (by Robert F. Wilson in the last full-length Stowe bio, published in 1941).

Stowe's life included the common difficulties of 19th-century women—dependency, mismanaged health, exclusion from public life—difficulties shared with the poor and with blacks, creating a natural identity of interests that, Hedrick explains, overcame barriers of race, class, and gender. The author also sees in Stowe the unfolding of literature in 19th-century America, from the instructive and entertaining "parlour literature,'' written by women for domestic reading aloud, to literature's professionalization after 1860 in journals and universities—a transformation dominated by men. But in 1850-51, when Stowe serialized Uncle Tom's Cabin (no publisher would accept it as a book), women were still creating the new American culture—and this novel captured it, inspiring, by 1893, translations into 42 languages, as well as numerous songs, plays, toys, games, and even wallpaper patterns. Despite her success, though, tragedy plagued Stowe: Her baby son died, an adult son drowned, and two other children became addicts, afflictions for which her Calvanist religion offered no comfort. In The Minister's Wooing, Stowe continued her attack on the abstract world of male clergy and legislators that she'd begun in Uncle Tom's Cabin, affirming the comfort she derived from poor black women rather than from theology. Writing mostly for the male-dominated Atlantic, she was supporting her entire family by the end of her career—an end created, she believed, by a mental exhaustion known only to women.

A splendid, balanced representation of an author in her many roles, and of the way she changed her world.