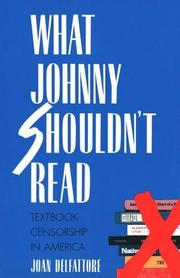 A frightening look at the pressures brought to bear on textbook publishers to mollify special interests by modifying schoolbooks. DelFattore (English/Univ. of Delaware) addresses the assault on the content of textbooks—and of supplementary literature like Huckleberry Finn—from the right and the left. Particularly notable are the attacks from fundamentalist Christians, who not only continue to challenge evolution but who bring to court such arguments as the one that being nice to animals could bring about the end of the world—which certainly puts most of Disney's fairy tales on the condemned list. DelFattore reviews in illuminating detail court battles in Tennessee, Florida, and elsewhere aimed at eliminating or radically altering textbooks and classic literature used in schools. Among the offenders: Chaucer, Shakespeare, Benjamin Franklin, Emily Brontâ, and William Faulkner. Although courts frequently rule against protesting parents who challenge educators' choice of textbooks, often the textbook publishers have already scurried back to the page proofs and begun cleaning up ``offensive'' entries. Texas and California are the two states with the financial muscle—because of the number of textbooks they buy- -virtually to dictate the content and tone of some nationally distributed textbooks. And more liberal California isn't off the hook in this discussion—for instance, its practice of softening or eliminating discussions of past racist behavior and racist language distorts history, says the author. A disturbing report on who's actually influencing what children read in school, suggesting that parents, teachers, and administrators take a closer look at how schoolbooks are chosen— and tampered with.