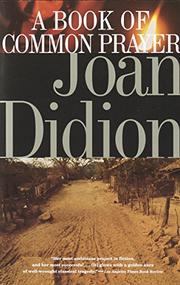 A BOOK OF COMMON PRAYER

More sad songs—replay them as they lay—in the shimmering oblivion of empty glasses down in Boca Grande (Central America) where Charlotte, another Maria, comes to stay before she is killed. Guerrilleros are everywhere, bloodshed seems inevitable. Charlotte's story is told by an older woman, a lifetime "student of delusion," now dying of cancer. As she comments, Charlotte dreamed her life and didn't make enough distinctions. Like a revenant, she goes to the airport every day, looking for her daughter Marin who hasn't been seen for months, Marin who hijacked a jet and is wanted by the FBI. She's the daughter of Charlotte's first husband Warren, a professor and something of a bastard (he contributes one of the few sharper lines in this book). He's also dying of cancer and for a while they travel together through the motel land of the South. Sometimes they're joined by Charlotte's second husband, Leonard, an activist lawyer, and later he disposes of Warren's ashes. Charlotte is carrying Leonard's child who will never see life—a hydrocephalic. Another mortal statistic. But then is Charlotte really alive—in a haze of amphetamines, sleeping in the afternoon, lying awake at night afraid of the dark? One of those lost ladies, dim survivors. Maybe she couldn't make any distinctions but Joan Didion knows the right ones—the Peychaud bitters that go with the Tanqueray gin. They add a decorative sophistication to all these fatal conjunctions. But my, what a stacked deck, as glossy and synthetic as those plastic cards which stick in humid weather. Que sera, this has the same frayed, seductive quality as the earlier novel and it will connect again, one to one, one to many.