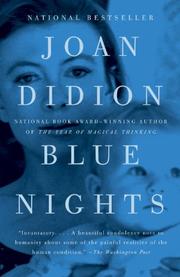 Didion (We Tell Ourselves Stories in Order to Live: Collected Nonfiction, 2006, etc.) delivers a second masterpiece on grief, considering both her daughter’s death and her inevitable own.

In her 2005 book, The Year of Magical Thinking, the much-decorated journalist laid bare her emotions following the death of her husband, John Gregory Dunne. The same year that book was published, she also lost her adopted daughter, Quintana Roo, after a long hospitalization. Like Magical Thinking, this book is constructed out of close studies of particular memories and bits of medical lingo. Didion tests Quintana’s childhood poems and scribblings for hints of her own failings as a mother, and she voices her helplessness at the hands of doctors. “I put the word ‘diagnosis’ in quotes because I have not yet seen that case in which a ‘diagnosis’ led to a ‘cure,’ ” she writes. The author also ponders her own mortality, and she does so with heartbreaking specificity. A metal folding chair, as she describes it, is practically weaponized, ready to do her harm should she fall out of it; a fainting spell leaves her bleeding and helpless on the floor of her bedroom. Didion’s clipped, recursive sentences initially make the book feel arid and emotionally distant. But she’s profoundly aware of tone and style—a digression about novel-writing reveals her deep concern for the music sentences make—and the chapters become increasingly freighted with sorrow without displaying sentimentality. The book feels like an epitaph for both her daughter and herself, as she considers how much aging has demolished her preconceptions about growing old.