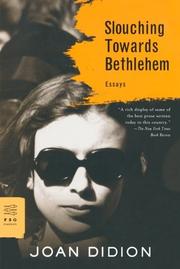 The title embodies the peculiar threat of Yeats' The Second Coming after a time when "Things fall apart; the center cannot hold": and in this series of twenty essays, many of them previously published magazine articles, the author is an adroit chronicler of many of today's maladies. Particularly in the title piece which consists of tight sketches capturing the ad absurdum freak-out of Haight-Ashbury, summer '67. Actually she's the sad savant from Sacramento lamenting a state that has "long outlived its finest hour," capturing it in all it's neon illusion whether covering a murder trial; visiting Joan Baez' citadel for non-violents; remembering Howard Hughes . . . "the last private man, the dream we no longer admit." Or taking apart the people's infinite capacity for self-delusion as in California Dreaming where celebrities pay to play cultural/political partisan in the Center for the Study of Democratic Institutions. There are bits on Las Vegas marriages; abandoned Alcatraz; the new Hawaii; gusts of the Santa Ana and their effect and what it's like to be young in New York. The pieces span three years, the earlier lacking the clean edge and penetration of the latter. Miss Didion is no female Tom Wolfe but she is a talented scene surveyor who will find her own audience.