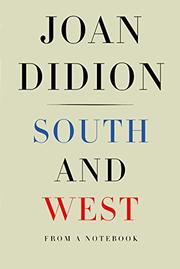 A revealing publication from the celebrated prose stylist.

In 1970, Didion (Blue Nights, 2011, etc.) took a sojourn in the Deep South, beginning in New Orleans and then heading to Mississippi and Alabama before returning to the Big Easy. (Also included are some pages about the author’s California homes in her youth.) Didion had intended to write a book about the South, but she just never got around to it. However, she retained her notes and observations, which compose this slender volume. Here are many of the splendid, sharp-eyed sentences for which she has long been admired. There are also brief notes, snippets of overheard conversations (in restaurants, on the street, in motels, libraries, around motel swimming pools), and sights along the road, viewed from her rental car. Didion writes about snakes, heat, sports, racial issues, and a strange coolness she experienced from many of the locals. In Oxford, she mentions that she could not find William Faulkner’s grave, which is hard to miss these days. She also bemoans the lack of bookstores in town, hardly a problem now. But what will strike readers is—as Didion declares—her inability to “get into it”—to interview the people she ought to (some avoided her) and to venture more deeply into the Southern heart. She does chronicle her interviews with some locals and others, including a visit with Walker Percy (for which readers will certainly yearn for more details). Didion also confesses that she was ready—just about at any time—to hop on a plane for home. But some of her observations are classics: a man with a shotgun shooting pigeons on a street in a Mississippi town; a comment about the fierce heat: “all movement seemed liquid.”

An almost spectral text haunted by a past that never seems distant.