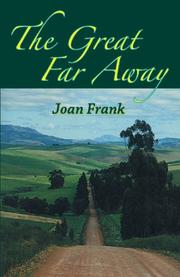 THE GREAT FAR AWAY

The dissolution of paradise is the theme of this novella about a community of youthful free spirits who mature into more settled conventionality and eventually fall back into the very patterns they were trying to avoid.

In the 1970s, young people dropping out of college or careers find themselves in Ferris, a northern California beach town. Since many are trying to escape their parents’ conventional expectations and their personal histories, they make living in the present moment their goal. Taking undemanding jobs, they spend their free time hanging out, banding together in a loose countercultural tribe. Naturally, romances spring up. Energetic Randy, who works with senior citizens, ends up with Alma, an earth-mother type. After his first girlfriend, Annie, dumps him, college dropout Graham turns to efficient, lively Darla. Both couples, like most of their community, marry and have kids. They start to create real homes, which require earning real money. Into the ’80s, the sense of communality lingers as Ferris gentrifies. Then at a tribe campfire on the beach, unexpected passion ignites between Randy and Darla. Along with physical attraction, the two share ambitions and a sense of entitlement that Alma and Graham lack. The affair goes on for years until their children are in their early teens, when Alma discovers the truth. After their subsequent divorces, Randy marries Darla and enters politics. Alma and Graham fade from view. Ferris becomes another sprawling bedroom suburb. Frank (Boys Keep Being Born, 2001, etc.) uses a narrator slightly removed from events. The reader learns only midway through that Annie is telling the story, piecing it together from letters she received after leaving Ferris. While imagining a past she did not witness, she implies rather than raises interesting questions about the seeds of the tribe’s failure. The individual characters remain sketches—even Graham, whom Annie presumably knew well.