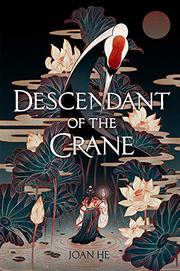 DESCENDANT OF THE CRANE

Her father, the king, taught her to believe in the people, the courts, truth, and the new era.

As Hesina begins to seek justice for his death, she finds hard truths and becomes entangled in lies, some of her own making. In her debut, He creates an Asian-inspired fantasy where centuries ago, the last of the relic emperors, who pursued selfishness over the welfare of the people, was overthrown by the Eleven, a group of outlaw heroes who authored the Tenets, a book that the rulers of Yan have since lived by. In building this new era, they also perpetuated the systematic slaughter of the emperor’s henchmen, the sooths, and anyone else with the power to see the future—those whose blood burns blue. At 17, Hesina needs to be the ruler her father groomed her to be while navigating the land mines of court politics, internal power plays, and personal betrayal. The plot twists are truly dizzying at times, and everyone, from villain to ally, has an intriguing backstory. Learning forgiveness and the need to sympathize with the things people do to survive, Hesina evolves, sometimes painfully, from a naïve, reckless girl to a compassionate queen. All characters may be assumed Asian, and the author makes an effort to incorporate Chinese terms and writing conventions throughout.