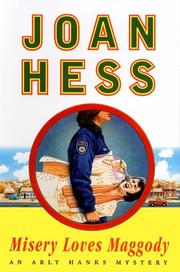 Misery may love Maggody, Ark., but police chief Arly Hanks’s mom, Ruby Bee, is itching to leave the no-horse town (pop. 755) together with her crony Estelle Oppers for a pilgrimage to Graceland, complete with stops at Elvis’s birthplace in Tupelo, the Elvis museum and chapel, several Elvis souvenir shops, and a climactic dinner with entertainment provided by a bevy of Elvis impersonators. The only trouble is that the package tour they’ve booked through a fly-by-night local lands them in a heartbreak hotel in Memphis before whisking them off—along with their tour companions: a pair of female entertainers, an eloping couple, and a waspish professor of popular culture—to The Luck of the Draw Casino and Hotel in Tunica, Miss., instead of Tupelo, spelling disaster for the couple’s plans to get hitched in the Graceland chapel and boding even worse for Ruby Bee (who’ll end up in the hospital with an undiagnosed malady) and for one of the entertainers (who skips the hospital and goes straight to the morgue). So Arly has to tear herself away from the current round of chicken-fried madness in Maggody—the satanist who’s desecrating the Mount Zion church by leaving barrettes behind, the continuing follies of the brain-dead Buchanon family (The Maggody Militia, 1997, etc.)—to show the Tunica police just how it’s done. The result is as marvelously giddy as anything in Hess’s first ten chronicles of Maggody, with a core of logic as surprising as a Cracker Jack prize. As even the Tunica cops admit, “This is better than a miniseries.”