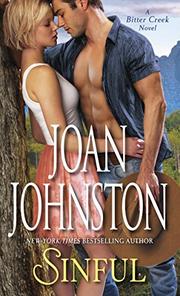 Army vet Connor Flynn enlists the aid of his late wife’s best friend, Eve (p.7), to help his children feel more secure, leading to an unexpected relationship with one of his wealthy family's sworn enemies.

After losing his wife, Molly, in a tragic accident, Connor leaves his kids with her parents while he finishes his last tour, then comes home to a custody battle. Winning the case mainly due to Eve, Molly’s best friend and the children’s godmother, who testifies on his behalf, Connor is grateful to the woman who was willing to stand up for him, despite being the daughter of his father’s worst enemy. The wealthy and powerful Flynns and Grayhawks have nursed a feud for years, so when Eve is willing to move into Connor’s new home to help his kids feel more secure, he's even more humbled. But when a social worker expresses concern over Eve’s single status, Connor proposes a pretend engagement that tumbleweeds into a real marriage, causing an uproar in both families. Eve has always had feelings for Connor, which she was never able to act on since she had inadvertently set him up with Molly. At first willing to do almost anything to help Molly’s children, Eve begins to wonder if her marriage to Connor may be the path to a happiness they never dreamed possible, even with family tensions rising, her professional career as a wildlife photographer in question, and Connor’s and Eve’s fledgling but fruitful philanthropic efforts in jeopardy. Johnston creates some sizzling sexual and emotional tension in her contemporary Western, which launches a new series connected to her popular Bitter Creek Western historicals. A few details are threaded up a little too neatly in the end—especially a kind of blessing from beyond the grave from Molly—but overall, this is a smart, sexy and satisfying read.

A tense, sensual and conflicted love story set against an epic family drama—worth a read for romance fans.