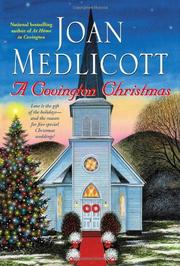 In the sixth in Medlicott’s series about lively senior citizens in Covington, N.C. (At Home in Covington, 2004, etc.), the new pastor overcomes a couple of crises with help from the local ladies.

Although they show up when needed, Hannah, Grace and especially Amelia take a less prominent role here than they have previously. Young Pastor Denny Ledbetter has taken over the local congregation to relieve the ailing Pastor Johnson, who for years acted as a father surrogate to the orphaned Denny and paid his way through seminary. While cleaning out the church attic with Grace, Denny discovers proof that 40 years earlier, the church briefly employed an un-ordained minister who performed five marriage ceremonies for which he never filed the proper papers. As a result, five of the community’s longest-married couples are not really married in the eyes of God. After some soul-searching, Denny breaks the news to the couples. The Herrills and the Craines, both upstanding members of the community, soon agree that holding a joint wedding ceremony on Christmas Eve would be a lovely way to renew their vows. The other three couples, all from a less genteel part of town, take some convincing, but eventually they too agree to be part of the ceremony—even poor Mary McCorkle, whose marriage has been less than happy. Now a new crisis arises—the sorry disrepair into which the church building has fallen. While the ladies light a fire under the men folk to help Denny refurbish the church, a mysterious visitor from France underwrites a new furnace, but will it be installed in time? Don’t worry too much; suspense is not a high priority for Medlicott, who designs her tales for comfort above all else.

Undemanding and very tame fare that avoids offending anyone.