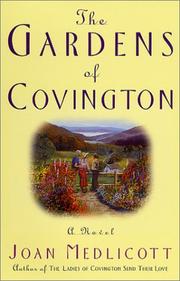 THE GARDENS OF COVINGTON

In a sequel to The Ladies of Covington Send Their Love (2000), insights are secondary to incident as the three friends, facing old age in a picturesque rural community, now confront threats to their land, their friendship, and their loved ones.

Only months have passed since Hannah, Amelia, and Grace moved into the renovated farmhouse on Cove Road in Covington, North Carolina, and began making new lives for themselves. Amelia, scarred physically and emotionally by the accident that killed her husband, continues to take award-winning photographs; Hannah, who was abandoned by her husband and had to raise her two daughters on her own, still works in the garden and the greenhouse she sold to a local young man; and Grace, a widow with one gay son, holds all three together with her warm wisdom. As the story opens, Grace, an accomplished cook, and her courtly lover Bob are getting ready to open a tearoom, and Bob’s widowed son Russell, father of grade-schooler Tyler, has fallen in love with Emily, whose parents have moved into a villa in a development in the next valley. The three women are unhappy about the development and even more concerned when they learn that the developer has plans for Cove Road as well. While Hannah fights to keep Cove Road as it is, Grace and Bob must help Tyler accept Emily as a stepmother. And Amelia, courted by the handsome if uncommunicative Lance Lundquist, must choose between sexual attraction and her hard-won independence. Two weddings and a funeral round out a plot that’s a whirl of activities, satisfactory resolutions, and low-key dramas as the three ladies remain true, strong, and ready for their next book.

Like so many sequels, more an update than a truly new story.