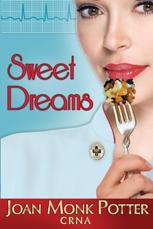 In Monk Potter’s debut novel, a romance between an anesthetist and a registered nurse is tested by a wrongful death suit and allegations of child abuse.

Grace Kimball, a nurse and the mother of two sons, has faced more than her share of struggles in her life. During a long, traumatic marriage to an abusive alcoholic, she fought a difficult battle with breast cancer. Now divorced and raising her two sons, Ryan and Michael, as a single mother, Grace carries the emotional scars of her marriage and the physical scars of her mastectomy. She has no interest in dating, until she meets a man who changes everything. Paul Allen “Dakota” Kohler, Grace’s co-worker at St. Erik’s Hospital, overcame a difficult childhood to become a successful anesthetist, and, like Grace, he’s haunted by the memory of an unhappy marriage. He’s had a crush on Grace for a long time, but his personal struggle with erectile dysfunction has kept him from asking her out. Grace and Dakota’s platonic friendship gradually develops into a more serious affair that promises to heal their respective wounds. However, their relationship and their careers are soon threatened when an orderly, Molly Shontell, dies following a routine medical procedure, and later, Ryan accuses Dakota of striking him. Monk Potter successfully develops a compelling relationship between two believable characters and treats Grace’s and Dakota’s challenges with compassion and dignity. Although the story’s primary focus is on the romance, two significant subplots add substance and introduce a rich supporting cast of characters. The author creates a complex dynamic between Grace’s sons and Dakota, highlighting the issues that a single parent faces when bringing a new partner into the family. The tension between Dakota and Ryan is realistic, with believable repercussions. Even Molly, who only appears in a few brief scenes, is an intriguing character, and her untimely death leads to an engaging legal battle.

An entertaining mix of romance and courtroom drama with a pair of sympathetic lead characters at its core.