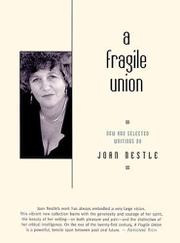 Poignant and vigorous—and some sexually explicit—essays on both personal history and the “herstory” of the lesbian community in America. In her introduction, Nestle (co-editor, Sister and Brother, 1994) describes herself as a “fifty-eight-year-old white Jewish fem lesbian woman with cancer living in New York City in the United States of America at the end of the twentieth century.” This collection comprises reflections on those particulars, ranging from commentary on her working-class mother’s eloquent journals through the history of lesbianism as it began to accumulate in the Lesbian Herstory Archives (now housed in a Brooklyn townhouse), which Nestle founded. Included are chapters on Nestle’s plunge into 1960s political activism—marching and demonstrating against nuclear arms and communist-baiters while keeping her sexual preferences secret from her socialist comrades. Beginning in that decade, however, lesbianism began to come out of the closet and the basement bars (Nestle recalls the latter somewhat fondly). In “The Politics of Thinking,” however, the author reveals her concern that in the 1990s, not only has “religious moral fervor” dampened free discussion of sexuality, but so have certain kinds of political correctness within the gay community, where anti-pornography factions had developed strength. Many of the stories that Nestle wrote then were descriptive tales of lesbian love affairs, and she found herself wondering whether those stories had “hurt lesbian women,” as the anti-pornographers suggested. The author also raises questions about the meaning of gender and about the devaluation of the feminine. In the section titled “A Gift of Touch” are some detailed reminiscences of erotic encounters with lovers—as well as reflections on coming to terms with cancer. Not for the erotically faint of heart, but work that demonstrates the author’s tenderness, courage, and concern for her chosen lesbian community and for “those who have lived in a ghetto of any kind.”