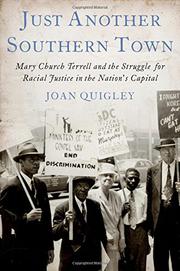 A retelling of the events leading up to the landmark civil rights Supreme Court case District of Columbia v. John R. Thompson Co., Inc., which invalidated segregated restaurants in the city in 1953.

The legal history of segregation in the United States is often bookended by two cases: Plessy v. Ferguson, which established the pernicious “separate but equal” precedent in 1896, and Brown v. Board of Education, which overturned Plessy and made state-sponsored segregation unconstitutional. However, as lawyer and journalist Quigley (The Day the Earth Caved In: An American Mining Tragedy, 2007) argues, the civil rights movement had other landmark cases and successes that created the momentum necessary for the Brown ruling. Among them is the case of Mary Church Terrell (1863-1954). In 1950, Terrell, an Oberlin-educated daughter of former slaves, was denied service at a popular Washington, D.C., cafeteria called Thompson’s Restaurant, only blocks away from the White House. The symbolism of the restaurant’s location was lost, however. Terrell, a lifelong activist and the first president of the National Association of Colored Women and founding member of the National Association for the Advancement of Colored People, used her political clout to challenge the discriminatory practices of the restaurant. Quigley expertly analyzes the legal drama of the court case, which was not without complication or difficulty. (A judge initially dismissed charges against Thompson.) The author also smartly references the dissent and turmoil of the Supreme Court at the time, which had to deal with cases like Isserman and the trail of the Rosenbergs, to explore how the court unanimously voted in favor of Terrell, a clear signal that the age of segregation was unequivocally over.

Quigley’s narrative of Terrell and her court case is especially relevant in the wake of numerous well-publicized killings of black citizens by police officers and the latest wave of black activism.