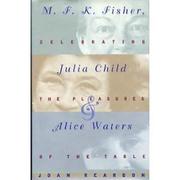 Celebrating the Pleasures of the Table

Pedestrian mini-biographies of three women who are household names among members of the Cuisinart set. Although Reardon (Oysters: A Culinary Celebration, not reviewed) clearly esteems her subjects, all of whom she met while preparing this book, her narratives lack the necessary spark to make them more than the sum of their many — and not always interesting — details. While she records meetings among the women, she does not weave the three biographies into a coherent whole exploring the US culinary scene. Instead, she follows M.F.K. Fisher from youth through three husbands (material about her menage a trois with husband number one and future husband number two made it into The Gastronomical Me), the Depression-era beginnings of her writing career, and friendship with Julia Child, whom she met as a co-contributor to a book on provincial French cooking. Child's career took off while she lived in Paris, where she met Simone Beck and Louisette Bertholle, who wanted to produce a "big book" introducing American audiences to French cooking. Joining in with the willingness to work and the enthusiasm that later endeared her to television audiences, Child was instrumental in shaping what became the landmark Mastering the Art of French Cooking. The least appealing portrait is that of Alice Waters, who comes across as self-absorbed. Converted to fine dining during a student trip to France, Waters tried, on returning to Berkeley, to persuade fellow activists there to spruce up their menus, arguing that even striking French communists were discriminating eaters. With determination, she and her mostly novice employees made a success of their imaginative restaurant in Berkeley's "gourmet ghetto," and by the time The Chez Panisse Menu Cookbook was published in 1982, Waters was, as Reardon notes, "So In, We Could Die." Strictly for the adoring fans of these culinary celebrities. Others will find it indigestible.