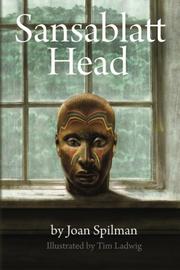 A teen unlocks the secrets of a mysterious wooden head in this whimsical YA fantasy.

At Boyle Middle School, seventh-grader Alec Mulroon lives to annoy his classmates and teachers. Hurling insults and fake vomit, he acts out for the attention he doesn’t get at home. His father is deceased, and his mother travels the world, concerned mainly with her tan. She does mail Alec presents, like bicycles and baseball mitts, that his caretakers, Wallace and Miranda Bairton, would have loved as children. Still, Alec resents his mother’s attempts to buy his affection. Then, incredibly, in the mail he receives a carved wooden head, which soon begins talking to Alec in private, calling itself Sansablatt and telling him fanciful bedtime tales about a place called Quelle. There, wizards known as Skylls fly through the air and summon anything they wish through Calling Doors; there are also Swarthy Giants and a feisty General in Chief named Eugenia McPherson McNutt. After hearing several tales about the magical realm—and one startling secret about Sansablatt’s origin—Alec is sure he’s destined to visit Quelle. But what awaits the teen if the fabulous stories actually come from his own restless mind? Author Spilman’s playful story will have readers racing for the answer. And even before the magic begins, fiendishly animated prose casts a spell: “Beneath the [head’s] glare he detected a gleam, beneath the gleam, a twinkle, and finally, finally, beneath that, what could only be described as a wink.” When Spilman fully unleashes her imagination, the result is often splendid chaos: The “belch, released from his stomach where it had been rolling and boiling all morning, now took on a life of its own.” But perhaps this novel’s most miraculous feat is the way it finds tenderness amid the cacophonies of silliness: “Alec already knew that Sansablatt was quarrelsome, impatient, and demanding. He also knew that he couldn’t live without him.” As the world within a world builds in complexity, readers will wonder if any canvas is large enough for Spilman’s imagination.