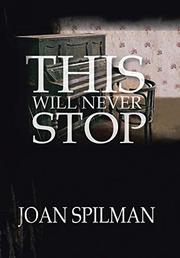 THIS WILL NEVER STOP

Harshbarger Mills, West Virginia. Lorraine Rhodes and her siblings were abandoned on a sad Easter by their alcoholic mother, who left them to be raised with little support in their judgmental, religiously conservative, small Appalachian town. Now married with children of her own—whom she is raising purposefully to be suspicious of religion—Lorraine harbors an understandable bitterness toward her mother, Carmen Amber Rhodes, who occasionally visits her in dreams. The answers to all of the questions she has about her mother are found in a letter that Carmen finally writes to Lorraine after a quarter-century’s absence, detailing her own life’s struggles with family, God, and alcohol. “I’ve written you many letters over the years but either crumpled them or X-ed out my thoughts,” pens Carmen. “I’m scared, Lorraine, but the best way to fight fear is with the truth. I’m going to tell you the real reasons I didn’t come back, and I can do this without a drink in sight.” The massive letter has an impact not only on Lorraine, but also on her daughter, Jenna Johnson, who has her own adolescent opinions on the whole situation—and predictably, she sees Lorraine as the villain, not Grandma Carmen. Finally, the matriarch of the family has her say: Lizzie McClure McComas, mother of Carmen, who has been buried in the town cemetery for long enough that her bones are bleached white. From beyond the grave, she takes up the story of the McComas/Rhodes/Johnson women, which began with her birth back in the early 20th century, and connects them all through their bloodlines and a curious family heirloom: a silver bottle that has been buried in the ground for 17 years. Spilman’s (Tight Squeeze, 2017, etc.) textured prose masterfully evokes the hard-knock lives and locales that define these women. It particularly shines in the Carmen section, which is both the longest chapter and the spiritual heart of the tale: “I’d have laughed if I’d been capable of it, but all I did was go where I was directed, dragging a shovel and carrying a trowel. The shovel was necessary because someone had donated four dwarf spruces, and I was the best hole digger. One of the men offered to help, but I declined.” Novels that chart families—and their curses—over the course of multiple generations are nothing new, but the author’s inventive structure manages to give the book a feeling of simultaneity, allowing four generations (one of them deceased) to share the present. It also permits resentments and traumas to fuel the plot rather than mere chronology, which helps dispel the sense of inevitability that so often is found in historical fiction. The ending may land with some readers better than others, but Spilman should be commended for making bold narrative choices. Together, these four portraits of West Virginia women—of different times, classes, and levels of opportunity—illustrate the stresses and expectations of small-town womanhood, both from without the family and from within.

A highly readable and adeptly crafted addition to the literature of Appalachia.