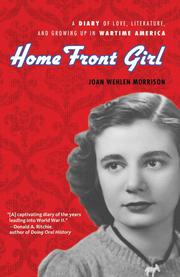 A Diary of Love, Literature, and Growing Up in Wartime America

Chicago schoolgirl Joan Wehlen was known for her writing skills—quite correctly, as her always-entertaining 1937-1942 diary proves.

Fourteen when she began recording her thoughts and day-to-day activities in her diary, Joan had an eye for detail and an intelligent sense of the importance of events that were occurring in the world around her. Her entries, while often funny and frequently self-deprecating, presage the inevitably coming war: “We are no different: every generation has been burdened with war….It is just that this is my generation.” Fear of the impending war is a common theme in her life; it haunts Joan’s dreams. But in spite of those concerns, she remains upbeat and enthusiastic. The diary reveals her amusement at wearing “a horrid but glamorous” color of lipstick, mild flirtations with “B.B.B. in B.,” the “Beautiful Blue-eyed Boy in Biology,” and her efforts to manage homework at the kitchen table. She tries to sort out her feelings on religion and the inevitability of death but chuckles over repeatedly counting the steps—“One-two-three-four, one-two-one-two”—during an awkward dance. In sum, readers will likely be surprised by just how much like them Joan is, in spite of her having written her work 75 years ago.

A fine, insightful and sometimes moving journal composed by a wholly likable young woman—better than fiction.