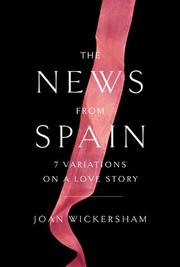 THE NEWS FROM SPAIN

Seven Variations on a Love Story

The seven pieces here tell seven different stories, though each has the same title. “The News from Spain” is also a touchstone phrase in each, its meaning transformed by the characters’ experiences. In the first tale, a woman whose longtime marriage has been rocked by a single infidelity sits on the beach with her friend, a man marrying for companionship and hoping his bride-to-be doesn’t want sex; they listen to “the news from Spain” roaring in a seashell, a recollection of simpler times. The phrase encapsulates a daughter’s discovery of her profound love for her dying mother; the excitement a teacher brings into a student’s life; betrayal, tragedy and the eternal sameness amid varieties of love. Four pieces are pure fiction, but Wickersham is particularly interesting when she rings changes on history. A very long tale insightfully examines the real-life marriage of choreographer George Balanchine and ballerina Tanaquil Le Clercq, stricken by polio and forced to accept her husband’s unfaithfulness; but it is just as nuanced and shrewd about Le Clercq’s relationship with her gay caregiver. The collection’s best story imagines modern odysseys for the Countess in The Marriage of Figaro and Elvira from Don Giovanni, interpolating the memoirs of their creator, librettist Lorenzo Da Ponte; what could have been a gimmick is instead a beautiful meditation on art, love and friendship. The final piece is slightly bumpier as it interweaves memories of a platonic adultery that may or may not be fictional with the story of a New York doctor beloved by both a president’s widow and a female journalist (unnamed, as were Balanchine and Le Clercq, but clearly Eleanor Roosevelt, Martha Gellhorn, and David Gurewitsch). Yet, here too Wickersham dissects the human heart with precision and restraint that make her work all the more moving.

Short stories don’t get much better than this, and for once, the overarching framework strengthens rather than dissipates their effectiveness.