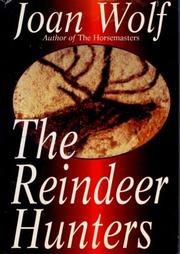 Wolf doesn't quite fill the shoes of Jean Auel here, nor does her third prehistoric romance (after The Horsemasters, 1993) strike off in many new directions of its own. At the end of the Pleistocene era, the ``Allerîd'' (a global warming trend) poses a challenge for tribes living on reindeer meat and other game as temperatures rise, glaciers shrink, and the vast herds of reindeer migrate, leaving the people of Europe competing for dwindling food supplies. The tribes in the foothills of the Pyrenees are lucky; reindeer are still plentiful in their area. As traders spread the word, hungry reindeer hunters migrate to make this land their own. The Norakamo and Kindred tribes, both indigenous to the area and both Horsemasters (as opposed to horse eaters), cement their strategic relationship by marrying Nardo, son of the Kindred chief, to fair Alane, daughter of the Norakamo leader. Blonde Alane is a distant cousin to Auel's blonde Ayla- -apparently even at the dawn of history blondes had more fun— though not so big and adventurous (no riding on cave lions). When she goes to live with her husband's tribe, she highlights the differences between her patriarchal people and the matriarchal, Mother-worshipping Kindred. Her attempts at getting Nardo to spend more nights at home threaten her mother-in-law, who fears that the Mother Blood is in danger. In creating a matriarchal society, Wolf shows women a different way of perceiving themselves and their potential importance in society. She also invents new words (``da'' for ``yes,'' ``na'' for ``no,'' the all-purpose exclamation ``dhu'') and provides the usual stilted ``primitive'' language: ``Alane tried to raise her knee so that she could get him in a place where it would hurt.'' Wolf's anthropological fantasy is always interesting, but it gets weighted down in plot and explanation. A horse and reindeer show that never hits its stride. (Literary Guild selection)