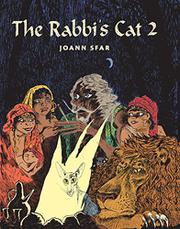 The sequel to Sfar’s graphic novel about a talking cat.

One good volume deserves another, as the Parisian Sfar (The Professor’s Daughter, 2007, etc.) extends the adventures of a rabbi, his daughter and their unnamed cat, who discovered the ability to speak (not always truthfully) after swallowing his master’s parrot. Once again the setting is 1930s Algeria, the French colonial homeland where the family has returned after a trip to Paris. The reader finds that the daughter’s recent marriage is even more strained, and that the Jewish community has begun to experience a growing swell of anti-Semitism. When the cat isn’t mediating between the bride, her inattentive husband (also a rabbi, but a more modern-minded one) and her kindly father, the talking feline discovers the surprising truth about Malka of the Lions (the elder rabbi’s cousin, more myth than man in the first volume) and embarks on a journey across Africa. Metaphysical slapstick abounds as the cat proves wiser in the ways of the world (and perhaps in the ways of the Torah as well) than three generations of rabbis and those who would try to follow a religious life. In the process, the cat apparently helps bring a young painter back from the dead, further complicating the daughter’s marriage, when what she considers art, while posing for the painter, her husband condemns as idolatry. Ultimately, the painter’s African pilgrimage sparks a mixed-race romance with a sensuality that puts the daughter’s passionless marriage to shame.

Ranks up there with the most provocative graphic narratives for adults.