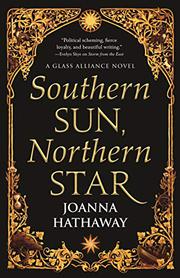 From the Glass Alliance series, volume 3

The conclusion to an ambitious series of diminishing rewards.

Once again the story flips between first-person narratives from Ali, formerly an Etanian princess and now a revolutionary fighting for nonmonarchical rule in her mother’s home country (while her brother continues to rule at home), and Athan, her star-crossed lover and third son of a Savient general who once fought against monarchy and now simply fights. The all-encompassing war and the technology evoke World War II, but here everyone is in the wrong, and the final outcome seems to leave most countries where they started—with added bomb damage and casualty lists. More than halfway through this doorstopper, the tantalizing showdown seen in the prologue of the first novel finally comes to pass, but it’s taken so long that readers might not even realize they’ve seen this scene before. Endless cycles of victory and defeat, populated by stock characters (who exist primarily to further the story) and often unlikable protagonists, all bitterly engaged in conflicts fueled by generations-old grudge matches: This should at least amount to an extended allegory about the emptiness and futility of war, but the whole is so cluttered with overwritten descriptions and overly focused on a not-very-compelling love story that it’s hard to see the possible forest for the many trees. Characters have a range of skin tones.