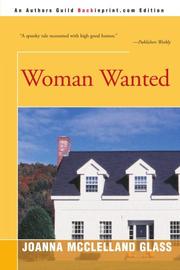 Like Reflections on a Mountain Summer (1974), Glass' second novel again focuses on a vaguely Oedipal love-triangle--less sensitively or credibly this time, with a tone that slides from offbeat charm to sit-com to psychodrama to soap-opera. Emma Rowena Riley, 35, has just lost her Harvard-dropout husband (""a flaming faggot faerie queen actor"") to a male rival. So it's hardly surprising that Emma, a childless high-school grad with no career (other than Kelly Girl-dom) of her own, is stirred by an ad in the Boston Globe: ""Woman Wanted. Perform household tasks. Widowed professor and son."" And when Emma arrives at the New Haven home of Yale prof Richard Goddard, 55, and his 22-year-old son Wendell, she finds that she is indeed wanted, needed, virtually worshipped. Both men dote on her--though Richard has a chic mistress in N.Y. and Wendell has a girlfriend at Bennington. She gets in the middle of a long-festering father/son impasse: Wendell, a wildly neurotic would-be poet, can't forgive poor Richard for his treatment of the late Mrs. Goddard (a frail hysteric, eventually institutionalized). Emma becomes the catalyst that ends Wendell's self-imprisonment and Richard's repressions; she coaxes terrified Wendell into sharing his poetry with the world; and, while Wendell's thwarted love for Emma propels him into brief, idiotic wedlock, Emma and Richard become lovers. (""I felt the old exhilaration in my loins, the old primal signal from the brain commanding the canal to make ready, make liquid, lubricate and warm the nest."") Happily ever after? Of course not. Wendell's initial jealous fury--""You slut!. . . You weren't hired to lick Dick's prick""--becomes silent suffering. The idea of longterm domesticity sours--as Richard tries to mold Emma into the perfect mate (student/cook). She strives to hold onto Self, not to lose ""my honor as a woman."" And after the inevitable stumble into sex-with-Wendell, there's a stagey, three-way confrontation scene--followed by pregnant Emma's solo journey to New Hampshire, a familiar soul-journey fadeout. (""Saving yourself, she had told Wendell, was paramount, elemental, a basically religious idea having to do with the essence of life."") There are amusing moments here, many of them shticky and extraneous: parties in academia, chats with pal Lydia, a black maid who dotes on public TV. (Summarizing educational programs, she ""sounds like Uncle Remus masquerading as Alistair Cooke."") And Emma is a basically appealing heroine--even if her narration is often effortful in its mixture of irony, lyricism, literary/show-biz allusions, and cutesy wordplay. But though some women readers may happily go along with the wish-fulfillment scenario here (woman desperately wanted by two gorgeous men), it's never quite believable and occasionally rather shrill.