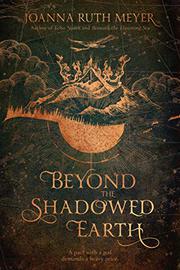 BEYOND THE SHADOWED EARTH

Eda has given up everything to become empress, but making a deal with a god is dangerous, especially one as clever as Tuer.

After the death of the emperor, Eda was made empress of Enduena, much to the chagrin of her (much older) advisers, who continually attempt to undermine her authority. Her first order of business was to bring back religious practices that the previous emperor abolished and reconstruct a temple in Tuer’s name: She made a promise to him that if she failed to do so, she would forfeit the life of her best friend, Niren. Wracked with guilt over gambling with Niren’s life, Eda is hit with another surprise when a new suitor arrives for her, Prince Ileem of Denlahn, her country’s greatest enemy. Could a marriage alliance save her people from all-out war with the Denlahns and give her the support she needs to finish her temple and save Niren? This ambitious book attempts to cover a lot of ground but struggles with pacing and character development. While the world is well built, with clear rituals, rules, and beliefs, the first part drags, readers will likely anticipate the ending, and characters’ behavior at times feels inconsistent. However, the second half of the book sees Eda’s growth, more action, and some exciting magic. Whiteness is situated as the norm; the Denlahns are brown-skinned, and Niren has bronze skin.

Overall, a solid and enjoyable book.