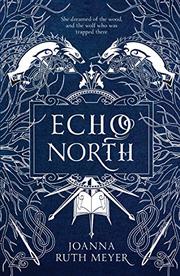 To save her father, a 16-year-old girl makes a difficult bargain with a wolf.

Echo Alkaev lives a quiet life with her beloved father and older brother, working in the family bookstore. When Echo was 7, she found a white wolf caught in a trap. Inexplicably drawn to help it break free, Echo, attacked by the wolf, was left with scars across her face which villagers say are the devil’s mark. After her father travels to the city to sell precious manuscripts and doesn’t return, Echo is distraught and fights with her new stepmother, who continually belittles her. Echo flees, finding both her missing father and the white wolf in the woods. The wolf offers a bargain: He’ll save her hypothermic father’s life if she’ll live with him for a year. She accepts. Though initially frightened, Echo tends the wolf’s magical house, outfitted with fantastical rooms. She forms a bond with the wolf, who tells her he’ll die when her year is over—and she decides she’ll do anything to prevent that. Drawing on classic tales, Echo’s story is epic and engrossing. Magic pulsates through every page; every landscape in this alternate Siberia lives and breathes. Echo is fierce, and her love for the wolf is hard-earned and true. Readers will ache when it’s over and want to start all over again. All human characters are white.