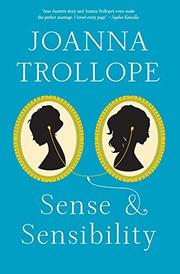 Six best-selling modern writers were commissioned by the Austen Project to update the classic novels. Matchless chronicler of Middle England Trollope (Daughters in Law, 2011, etc.) was paired with Sense & Sensibility, which now morphs into upmarket chick-lit.

Austen fans will be familiar with the story of the Dashwood girls—sensible Elinor, beautiful Marianne, and young, spirited Margaret—who, with their mother, are cruelly cast out of the family mansion when their father dies. Trollope adds interior-design values to Austen’s preoccupations—sex, money and class—by pitting the Dashwoods’ shabby-chic taste (faded damask curtains; pretty but chipped china) against the stripped-down, inappropriately modern style of the thoughtless cousins who evict them. Taken in by another wealthy cousin with another decaying mansion, they move to a modern house on his estate—oh, the suffering. Trollope offers occasional flashes of Austen-esque wit, but more often, her writing, though immensely experienced, lacks the grace of the original. Without it, the girls and their misadventures in pursuit of romance and financial security seem less subtle and charming, more foolish and conventional. Marianne falls for a rotter instead of solid Col. Brandon; Elinor "ha[s] feelings for" nice-but-weak Ed, who seems to get engaged to someone else. Their various happy endings bring neatness but less joy than Austen’s.

A questionable remake of a classic, honorably undertaken but coarser and less comic than the original—unsurprisingly.