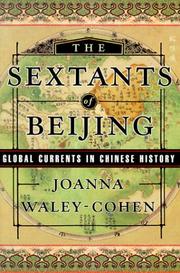 THE SEXTANTS OF BEIJING

Compelling revisionist history of Chinese foreign relations. Waley-Cohen (History/New York Univ.; Exile in Mid-Qing China, 1991) is mainly concerned here with dispelling certain myths about Chinese attitudes and actions toward the rest of the world. China has been viewed as rabidly isolationist, virulently hostile to and ignorant of the world outside its borders, and irrationally resistant to change and innovation. All of these views, argues Waley-Cohen, are wrong, and stem from the peculiar perceptions of 19th century Western colonizers whose imprecations China quite naturally resisted. The author provides much historical evidence to back up her claims. As early as 200 b.c., China had established networks of trade throughout all of Asia, and later was to extend these ties to Europe and the New World. Foreign ideas and innovations were not as a rule shunned but welcomed. Buddhism, imported from India, became highly influential; foreign inventions, such as the sextant (hence the title of the book) and other astronomical instruments introduced in the 17th century, were enthusiastically adopted. What emerges from the author’s historical account is hardly the image of a benighted backward nation. But perception is often everything. China has indeed at times been hostile to foreign influences, yet the author shows this has often been for good reasons. Jesuit missionaries in the 16th century eventually met with official and popular resistance, yet Jesuit insistence on the exclusivity of Christianity ran counter to China’s traditionally tolerant and eclectic attitude toward religions. China did indeed attempt to restrict trade with the West in the 18th and 19th centuries, not out of ignorance, however, but from understanding all too well the imperial designs of the West. In modern times, China under communism has often been extremely hostile to the West, especially to the US, yet the US for its part reviled China, until very recently, as a criminal and outlaw regime. A provocative, original, and accessible study that may cause readers to reexamine long-held assumptions about China.