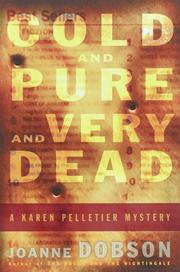 COLD AND PURE AND VERY DEAD

Irritated by condescending New York Times reporter Martin Katz, Prof. Karen Pelletier (The Raven and the Nightingale, 1999, etc.) flippantly responds to his “best novel of the century” question by naming Oblivion Falls, a notorious 1950s page-turner (think Peyton Place). Katz’s sensational article on Karen’s contrary choice of the steamy novel that had been banned in Boston results in its return to best-seller lists and Katz’s murder—seemingly at the hands of Mildred Deakin, the author who had vanished soon after her famous book’s publication. Why Deakin turned from New York’s glitterati to settle down as obscure goat farmer Milly Finch raises questions about life and literature, past and present. Karen’s own working-class background is mirrored in Oblivion Falls, still ridiculed as too cozily feminine by the hard-boiled, gray-haired literary establishment. Dobson’s hilarious send-up of the steaming male thrillers celebrated by these eminences exposes the heroic adventures they love as sappy (albeit virile) and less earthy than the women’s fiction they scorn. Meantime, Karen wonders whether Enfield College visiting writer Jake Fenton—author of hypermasculine adventure tales she’s seen huddling with both older male critics Deakin would have known in the 1950s and with the definitely nonacademic Lolita Lapierre—isn’t a little too interested in the revival of Oblivion Falls.

The chain of events Karen initiates proves once more that words can kill in fiction and for real. And Dobson’s sparkling tale lures readers through enough bait-and-switch red herrings to guarantee a riveting curiosity about who’s who.