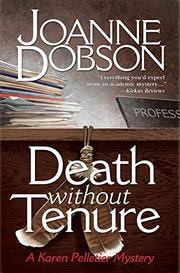 Going up for tenure turns out to be only the second biggest strain on professor Karen Pelletier’s life.

Each department at Enfield College is restricted to a single tenure appointment this year, and the English faculty must choose between promoting a colleague who’s published two books and a slew of scholarly articles and a Native American who never even finished his dissertation but argues that he should be judged on his “speakings” rather than his writings. Karen seethes as Ned Hilton, the English department’s new chair, indicates his preference for Joseph Lone Wolf. Soon enough, however, Karen’s problems are alleviated. Joe is no longer her unstoppable rival for the promotion but a corpse, and she’s no longer the underdog but a leading suspect in his murder. Threatened with arrest by Lt. Neil Boylan, who has it in for her sweetie, Lt. Charlie Piotrowski (off in Iraq with National Guard), Karen wonders forlornly, “Would I ever get tenure after that?” The mystery is a trifle—Karen comes across the essential clue quite by accident at the 11th hour—but the skewering of identity politics and political correctness is real enough, even if the ending is just a little pat.