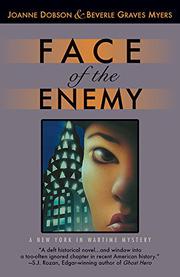 FACE OF THE ENEMY

Private-duty nurse Louise Hunter moved from Kentucky with her doctor fiance only to be dumped when his mother disapproved. She’s outraged when patient Robert Oakley’s wife, gentle Japanese artist Masako, is swept up by the FBI and accused of espionage. Masako’s art show had recently been shut down by racist demonstrators, and when the body of her art dealer is found under one of her paintings, Masako is accused of murder. One of Louise’s Brooklyn housemates, ambitious Cabby Ward, who works for The New York Times, is ready to exploit Masako’s problems to get a good story. The German immigrant who owns their house has troubles of her own: Her underage son runs off to enlist to make up for the fact that his missing father is a Nazi. NYPD lieutenant McKenna has to fight the FBI for access to Masako until another of Louise’s roommates helps her find a civil liberties lawyer who will take on her case. McKenna is getting pressure from above to charge Masako; Oakley is at death’s door in the hospital; and all Masako’s paintings have vanished as Louise joins a skeptical McKenna to try to prove Masako innocent. Dobson (Death Without Tenure, 2010, etc.) and Myers (Her Deadly Mischief, 2009, etc.) collaborate to introduce a planned series on wartime New York. Even mystery mavens who spot the villain early on will savor the colorful characters and the evocation of Gotham in the 1940s: the Bund, America First, egg creams, Schrafft’s, Horn & Hardart. More, please.