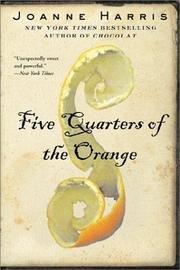 FIVE QUARTERS OF THE ORANGE

An overwrought and often contrived tale with one too many characters named after food.

When elderly widow Françoise Simon returns to the sleepy village on the Loire where she grew up, she’s grateful that no one recognizes her after all these years as Framboise Dartigen, daughter of a woman suspected of collaboration during WWII. Framboise sets up a small crêperie and keeps her silence, whiling away the time by studying the immense scrapbook her mother, Mirabelle, left to her. This crumbling but fascinating volume is crammed with recipes, clippings, and handwritten notes in a peculiar code, which she gradually deciphers. Framboise is forced to relive her own central role in the long-ago scandal as the youngest of three children who eagerly take small luxuries like chocolate and silk stockings from the occupying German soldiers, offering in exchange information that can be used to blackmail the villagers. Framboise befriends Tomas Liebniz, youngest and best-looking of the soldiers, and confides her desire to catch Old Mother, an enormous pike lurking in the depths of the Loire. He provides fishing tackle and advice, as well as a means of getting around her disapproving mother. Mirabelle suffers from excruciatingly painful migraines, which can be triggered by the scent of oranges. Tomas gives one to the nasty little girl, who saves the peel and uses its pungent smell to repeatedly incapacitate her mother. Only morphine—now impossible to obtain—eases the pain, and despite her hatred for the Germans who shot and killed her husband, Mirabelle too turns to clever Tomas, who procures it for her. After his accidental death by drowning and a bloody shooting rampage by German soldiers, the Dartigens face the wrath of the townsfolk . . . .

Harris (Chocolat, 1999) is capable of elegantly sensual writing, but Five Quarters degenerates into melodrama all too soon.