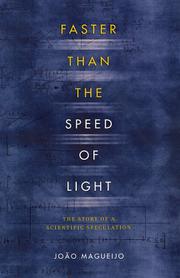 FASTER THAN THE SPEED OF LIGHT

The Story of a Scientific Speculation

A brash young cosmologist describes his attempts to redefine one of the keystones of relativity.

Magueijo (Theoretical Physics/Imperial College, London) is no crackpot, although many of his colleagues thought so when he suggested a variable speed of light (VSL) as an answer to problems in the Big Bang theory of the origin of our universe. VSL verges on heresy; relativity, which states that the speed of light in a vacuum is constant, has been verified by numerous experiments since its postulation by Einstein in 1905. But while the Big Bang is a direct corollary of relativity, the uniformity of the visible universe is difficult to explain if the speed of light cannot be exceeded. Nor does relativity provide a bridge between the large-scale structure of the universe and the quantum-level structure of matter. Into this theoretical vacuum have flooded superstrings, loops, branes, and all the other hopeful doctrines of recent physics, each eagerly promoted by its advocates. The newest of the new is VSL, which now appears to have some observational support. Having overcome major hurdles on the way to getting his theories published, Magueijo makes clear his contempt for the scientific gatekeepers who determine whose work will appear in which prestigious journal, whose will be rewarded with grants and tenure, and whose cast beyond the pale of science. Thus the work reads like a battle report, with high praise for supporters and little sympathy wasted on opponents. Combined with his position as an outsider in the British science establishment (though educated at Cambridge, he was born in Portugal), Magueijo's obvious lack of interest in pretending to be polite to those he has identified as enemies makes this one of the more scathing scientific memoirs of recent years.

The scientific status of VSL remains uncertain, but its creator’s account of his investigations is irresistible.