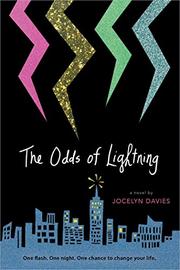 THE ODDS OF LIGHTNING

Putting a scientific cast on magical realism, the lives of four teens are changed by a bolt of lightning.

Three years ago, Tiny, Lu, Will, and Nathaniel were the best of friends, but a combination of factors separated the friends, and now they're little more than acquaintances. The night before the SATs, a mega-storm approaches New York, and Will throws a party. The four of them are together for the first time in years—and as if that weren’t cataclysmic enough, they are struck by lightning. When they wake up, they all have strange new powers, which, predictably enough, represent their greatest fears. This change sends them on an odyssey through a city giddy with the approaching storm, one that helps them understand the circumstances that broke up their friendship: the death of Tobias, Nathaniel's older brother and Tiny's first kiss, Will and Lu's failed attempt at dating, and more. “And out here in the city streets there was thunder and lightning and music”—which, along with some science, will help the quartet find a solution to their disorders. The third-person narration interleaves “now” with “then” sections, shifting focus to alternate among all four protagonists. The voices are well-drawn, and while their disorders are not particularly complicated, Davies captures a realness to these white teens' interactions and history.

Both “then” and “now” plots combine to make an engaging work.