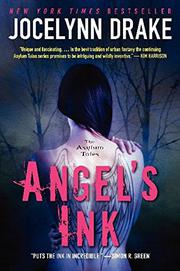 From the author of the Dark Days series (Bound to Me, 2012, etc.), the first of a new urban-fantasy series centered on tattoo artist Gage Powell.

In Asylum, a seedy part of Low Town, assorted strugglers and lowlife humans somewhat uneasily coexist with elves, werewolves, vampires, trolls and other supernatural folk. Above them all are the witches and warlocks in their concealed Ivory Towers; first-person narrator Gage, once a warlock, fled after fighting his mentor, Simon Thorn, when he could no longer stomach their cruelty and arrogance. The Ivory Towers council let him go but assigned a watchdog to ensure that Gage uses his magic only in self-defense. Against this extensive, carefully worked out backdrop, Gage tries to keep his head down and practice his art—which usually involves adding a little magical something to the ink’s ingredients—assisted by Trixie, a drop-dead gorgeous elf who conceals her true identity, and Bronx, a hulking, good-natured troll. The plotting, too, is both intricate and well-articulated. Among the problems Gage must deal with: a representative of the local Grim Reaper’s union; some armed-to-the-teeth elves enquiring after Trixie; a witch turned into a cat and exiled from the Towers; Simon, intent on killing Gage to further his political agenda; and a very dangerous and dark elf gangster. Stir in a bout of hot sex and some magical battles—the latter, oddly, often devolve into mere physical violence—and it’s a shame that the characters remain flat and clichéd, especially dull Bronx and the hissing villain Simon.

Still, these are minor issues in what is mostly a distinctive and absorbing tale.