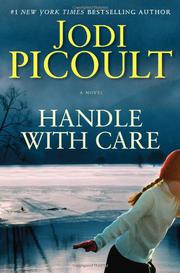 In another issue-driven novel, Picoult (Change of Heart, 2008, etc.) explores the impact of “wrongful birth” litigation on an ordinary New Hampshire family.

Charlotte O’Keefe, a prominent pastry chef, was thrilled when she conceived at age 38 without resorting to fertility treatments. Although she has a daughter, Amelia, by a previous relationship, she and her new husband, police officer Sean, wanted a child of their own. Charlotte’s best friend Piper unwisely agrees to be her OB-GYN. Eighteen weeks into the pregnancy, during a routine ultrasound, Piper, looking for signs of possible Down syndrome, discounts the import of the fetus’s unusually transparent cranium. At 27 weeks, another ultrasound reveals that Charlotte’s daughter has sustained several fractures in utero, a sign that she suffers from osteogenesis imperfecta (OI), a rare congenital defect that causes brittle bones and severe complications (including scoliosis, respiratory problems and years of costly orthopedic interventions). Now age six, Willow, still toddler-sized, cannot walk, play or even turn over in bed without risking a compound fracture. Charlotte abandoned her career to care for Willow 24/7. Although Willow is precocious intellectually and for the most part a joy to be around, her illness is, inarguably, a drain on family finances and emotions. After a vacation at Disney World goes horribly awry, the O’Keefes spiral apart. Charlotte decides to file a wrongful-birth lawsuit against Piper. The proceeds from the lawsuit, she rationalizes, would provide the quality of lifetime care Willow needs, even if suing amounts to betrayal. Sean is appalled by the implications of the lawsuit: that Willow should never have been born, and that Charlotte, if properly cautioned, would have contemplated abortion. Amelia, once a normal teen, becomes a bulimic, self-mutilating shoplifter.

Picoult’s strengths are evident in her exhaustively researched and gut-wrenching demonstration of OI’s devastating effects and the impact of a child’s disability on a sibling. However, too often characterization takes a back seat to polemic. Worse, the central moral quandary is undermined by an overly pat resolution.