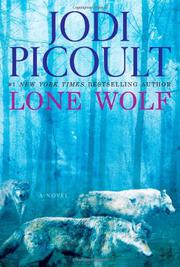 Wolf expert languishes in a coma while his family debates his fate, in Picoult’s latest.

Luke Warren doesn’t dance with wolves, but he does practically everything else with them—eat raw meat, hunt, howl and endure bites to establish trust. Since he first befriended captive wolves in a small New Hampshire theme park, he’s sought to join the pack. In fact, Luke’s lupine family, not to mention the fruits of his passion—an Animal Planet series and bestselling book—have effectively supplanted his blood relations. His wife, Georgie, divorced him and is now remarried to a lawyer, Joe. Luke’s son, Edward, a gay man, fled for Thailand at 18, after his attempt to come out to his father had unintended consequences. Only daughter Cara remains faithful, even accompanying Luke on some of his wolf adventures. Now, however, Luke’s ex-family has been uncomfortably reunited by a tragedy: Driving home after rescuing Cara from a drunken teenage party, Luke crashes his car. Cara, 17, suffers a shoulder injury, but Luke sustains severe brain damage. Edward is summoned home—as the only adult next of kin, he must make medical decisions for his father. Luke lies in a vegetative state with little hope of recovery, and his license indicates he’s a willing organ donor. Edward wants to terminate life support—before leaving years ago he was given a handwritten directive indicating his father had anticipated just such a scenario and wanted no extraordinary measures. Cara insists her father will awaken. The alternating voices of the main characters detail how Luke’s human family broke up, and how he was able to ingratiate himself with wolves as an itinerant male, a “lone wolf” recruited by a pack to replace a lost member. The thoroughly researched wolf lore is fascinating; the rest of the story is a more conventional soap opera of hospital, and later courtroom histrionics.